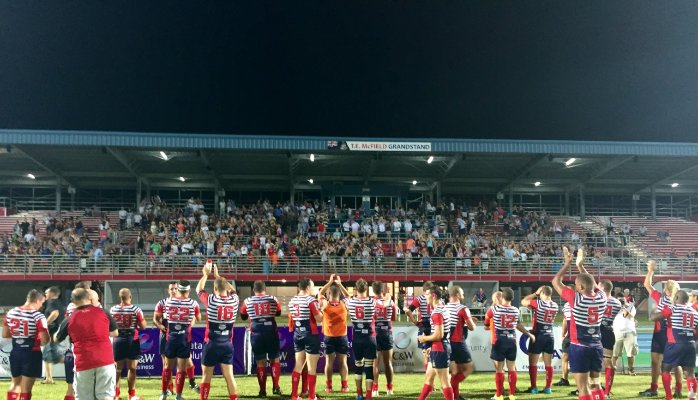 via LinkedIn
Published on June 21, 2016
by Phil Pretorius – Director of Rugby at Caymans Rugby Union

The RHSW Cayman National XV’s recorded their biggest win ever over Bermuda when beating the old foe by 47-11 at Truman Bodden last Saturday.

The occasion was a Word Cup Qualifier, Rugby North America’s fixture and was also The Security Centre Big Game 7.

The Cayman team achieved several milestones with this triumph. Most importantly they are still on course to qualify for the World Cup after winning both their opening matches.

With this victory the RHSW Cayman team also climbed 3 places on the World rankings above Sweden, Luxembourg and Singapore.

The team has extended their unbeaten run to 9 games this season. Since the CRFU was formed in 1976 this is the longest unbeaten run yet, beating the 7 game run in 2002.

Phil Pretorius, head coach, thanked the crowd for the great attendance and the special vibe created during the game. According to Pretorius the team is “honoured to represent their country and the tremendous support they received throughout the season is spurring them higher”.

Pretorius also lauded his troop for their dedication throughout the season. They have started training on 4 January and for 25 weeks had to juggle as amateurs a tough training regime with work and family commitments. There is an underlying humbleness and dedication present which makes loftier ideals that much easier.

Cayman played a great brand of attacking rugby and scored 7 tries in the process. This bring their total tries to 71 in 9 games.

The backline was fluent and dangerous every time they received the ball.

Michael Wilson and Danno O’Connor was again an outstanding centre combination. Wilson scored 2 tries with blistering pace and good angle running. O’Connor, the best line breaker in the squad, made some telling runs of which 1 led to Wilson’s 2nd try.

Wilson was also nominated as man of the match,

Justin Wight has a knack of scoring in every match and he extended his try scoring record to 8 for the season. The Youth Development manager of the CRFU showed his young fans at the game how to beat defenders and score tries.

The halfback pairing of Morgan Shelver and Neil Montgomery was again the play makers in the team and created many opportunities for the outside backs.

Edward Westin in his 1st start as fullback did well and scored a 35 try. In the 2nd half Joel Clark, the champion runner, came onto the pitch and immediately played a part in ripping the defence open.

Up front is was a different story. The Cayman forwards had a tough time against their counterparts.

In the scrum the Cayman team struggled for the 1st time this season and lost 3 of their 9 scrums. The Cayman scrum did also not create a right shoulder to attack from. In the line-outs the team struggled initially but later in the game Yohann Regnard dominated possession. The Cayman line-out also did very well on the Bermuda line-out and overturned 6 of their 12 line-out throws.

Ben McDonald and Peter de Vere came on as replacements and just as in the game against USA South brought new intensity to the game.

For the Bermuda team their number 8 and former South African Schools star Roedolf van der Westhuizen did well. The visiting tighthead, Dustin Archibald, was very strong in the scrums.

The Bermuda captain and lock Peter Dunkerley was a physical presence throughout the game.

This international was also a special occasion for the famous local family, the Westins.

As far as can be established they made history by becoming the first 4 brothers, that played in an official World Cup Qualifier together ever. Thus possibly a world record for the Westin’s!

Well done to Edward, Shane, Joey and Paul. Mark, the 5th brother has also played for the National team this season and to make matters rosier there is also Matthew, a budding star in the u/14’s team. Elizabeth, the sister, plays for the women’s 7’s team.

Next up for the Cayman team is Mexico in Mexico City on 2 July in the final of the northern zone of Rugby Americas North.

The Cayman team against the Bermuda: