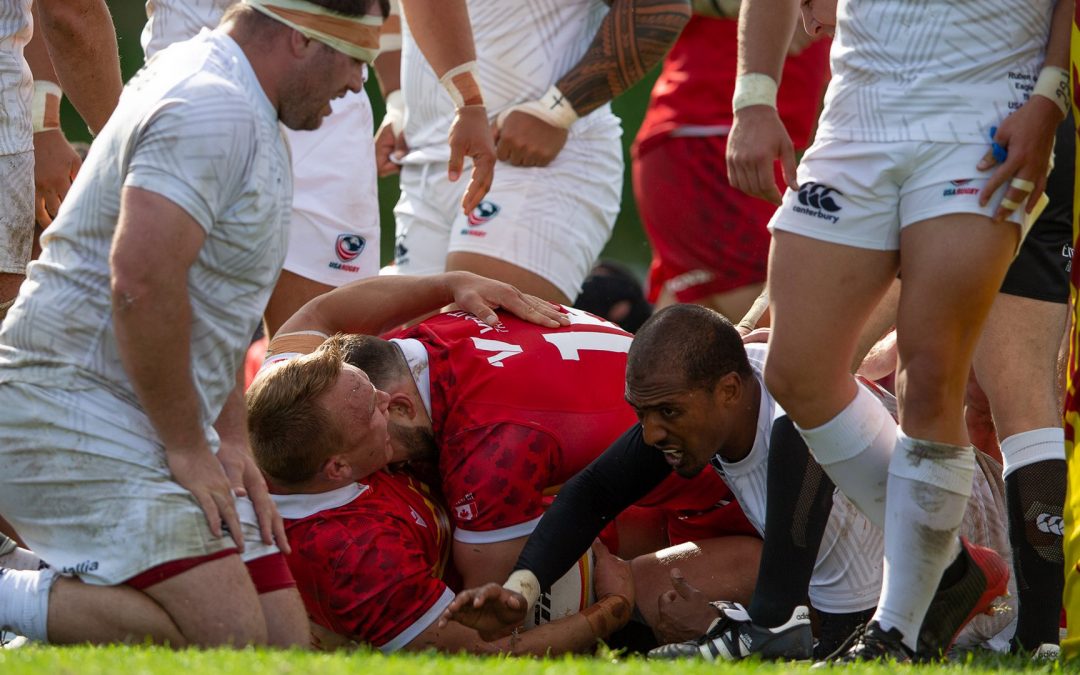 On Saturday afternoon in St. John’s, Newfoundland, Canada’s Men’s Rugby Team picked up their first win over their North American rivals, USA since 2013 by a score of 34-21.

🏎 In the driving seat

🇨🇦 @RugbyCanada turn it 🔛 in the second half to take a 13-point lead into next week's second leg@France2023 | #RWC2023 pic.twitter.com/YybqfFACz6

Canada was led by emphatic performances from Rugby ATL’s Conor Keys and Matt Heaton in the forward pack, and Peter Nelson used the gusty conditions at Swilers Rugby Club to control the game brilliantly. Man of the match honours were given to inside-centre Spencer Jones of the Toronto Arrows.

The win marks the second consecutive victory – albeit 15 years apart – for Canada over USA on “The Rock” in Newfoundland and Labrador as part of RWC qualification. Back in 2006 Canada pulled off a heavy 56-7 win over the Eagles en route to booking their ticket to the 2007 edition, also in France.

The series now shifts to Glendale, Colorado – nicknamed RugbyTown USA – for the second and final match of the series. Eagles’ boss Gary Gold and his team will look to use the home crowd to their advantage as they must overcome a nearly-two converted score deficit if they hope to take the RAN #1 seed.

The winner of the two-game series will face Sudamérica Rugby #1 seed, Uruguay on October 2nd and 10th with the Americas 1 position in France.

The loser of the North American series on September 4th and 11th, deemed RAN #2, will face off against SAR #2, Chile, on October 2nd and 10th. The winner of RAN #2 versus SAR #2 will take on the loser of RAN #1 versus SAR #1 for the Americas 2 position at RWC 2023. Details for that competition in 2022 have yet to be announced by World Rugby.

The loser of the Americas 2 qualifier will advance to the last-chance World Rugby global repechage.

“Pretty much at a loss for words. Completely and totally unacceptable performance. Very disappointing considering we had a very good start. We were dominant, at the set piece against these guys and ultimately we were the masters of our own destiny. This was 100% our own doing. We had an opportunity to close a team like Canada out with a strong set piece. Our scrum went well in the beginning, our maul went well in the beginning and we didn’t capitalize on it.

“If we’d converted even two or three more of those before half time, the picture would have been completely different. Obviously, the concussion for Cam hurt us and a couple of changes that had to be made is obviously not ideal, but it’s the same for both teams so there are no excuses.

“The challenge has been laid. We knew that this was going to be a very good Canadian team. And they came out and proved it. Just really disappointing all around and we’ve got our work cut out for us. We have to step up to the plate next week if we want to be serious about qualifying for Rugby World Cup.”

13 points to make up at home next weekend.

“That was a great win today. It’s always a challenge playing these (Rugby World Cup qualifiers) back-to-back so we’ll celebrate the win because it’s important, but we need some humility looking forward to next week. We have a 13-point lead at the moment and 80 minutes to play. Would I have signed for that this morning? I probably would have.

“We’ll take that but we know it’s going to be a different challenge next week, a big challenge. We need to make sure we enjoy the win because they’re few and far between with the level of teams that we’ve been playing recently, and we can take some confidence from it.”