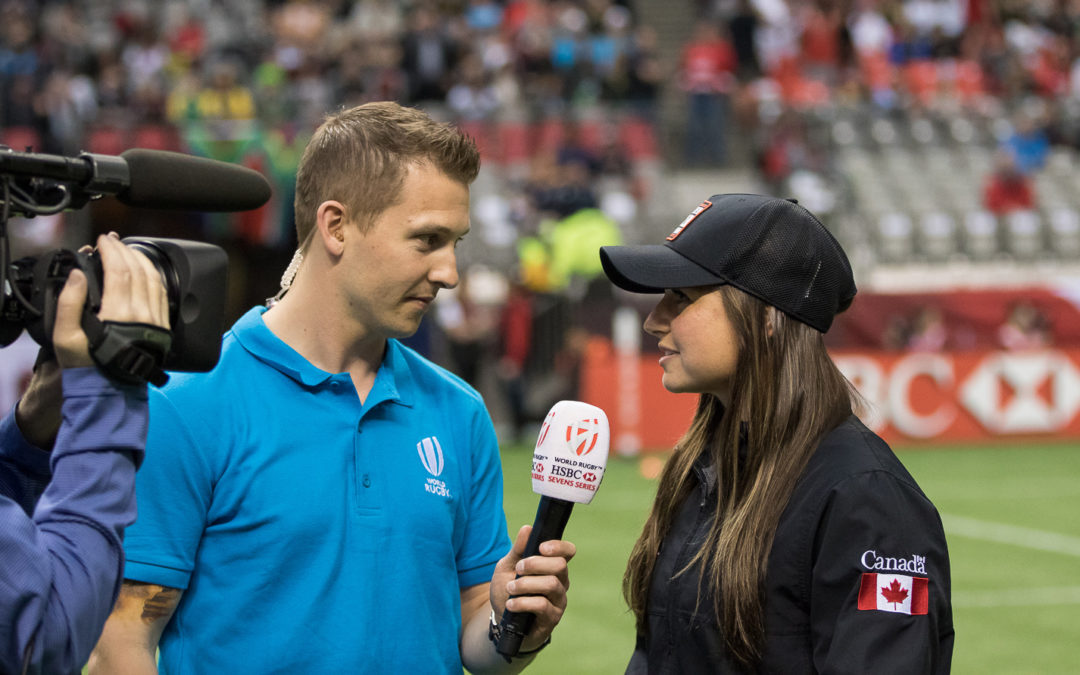 Kelly comes to the organizations with an impressive resume. During his tenure at Rugby Canada he helped Rugby Canada gain over 230,000 social media followers, which is the 3rd largest amongst Canadian national sport organizations, as well as helped to build the HSBC Canada Sevens tournaments from the original idea to being voted the best stop on the world series.

Kelly served as the press manager for over 100 Canadian test matches and international games and 13 HSBC World Rugby Sevens stops. The roster of prestigious events Kelly has been a part of include the Toronto 2015 Pan-American Games, 2014 & 2017 Women’s Rugby World Cup in France & Ireland,  2015 Rugby World Cup in the UK, 2016 Summer Olympic Games in Rio de Janeiro, and 2018 Rugby World Cup 7s in San Francisco. Before Rugby Canada, Kelly worked as an intern for the Edmonton Oilers in the National Hockey League in their social media and communications department.

The expanded role comes as rugby in the Americas Region has been rapidly growing, and the presence of robust digital media, commercial and communications coordination across all unions will help power rugby development and competitions in the hemisphere to the next level.

“With over a decade of experience leading communications for a major union, as well as experience building events and digital presence from the ground up, Bryan is a great fit for the position,” said Dan Payne, CEO of Rugby Americas. “As cross-regional competitions continue to thrive and develop, we are looking to Bryan to help showcase the great work happening in each union, continue to tell the stories or our players, fans, and coaches, and most importantly accelerate our growth in the digital space.”

Kelly steps into an important role as Rugby Americas North heads into the 2019 RF Group RAN Sevens Tournament in July. This year’s tournament, happening July 6-7 in Cayman Islands, is a qualification event for the Games of the XXXII Olympiad Tokyo 2020 to take place July 24th through August 9th, 2020 in Tokyo, Japan.

“With rugby continuing to grow and develop across the RAN region we are fortunate to be able to recruit Bryan to assist with this growth,” said RAN General Manager Niall Brooks. “Bryan’s knowledge and experiences working within the rugby community will be of great value as RAN continues to enhance all of its broadcasting, communications, and digital media platforms and capabilities.”

Kelly is a graduate of Camosun College’s Applied Communications Program and Royal Roads University’s Bachelor of Arts in Professional Communications Programs. A former high-level hockey player, Kelly was introduced to the sport of rugby in elementary school and has played ever since, winning multiple provincial championships with the James Bay Athletic Association in Victoria, B.C. Also a passionate rugby commentator, Kelly has been a play-by-play voice on CBC, TSN, FLO Rugby, NBC, dozens of live streams and the HSBC World Rugby Sevens Series.

“I’m incredibly thrilled to be taking on the role of Communications Manager for Rugby Americas and Rugby Americas North,” Kelly said. “With global participation numbers on the rise, I look forward to building meaningful connections with athletes, staff, member unions, media partners and fans across both continents to ensure the sport continues to grow for future generations.”

“Rugby has taken me around the world as a fan, player and employee and I’ve experienced the game from grassroots to some the world’s biggest stages,” Kelly explained. “As the former Media and Communications Manager for Rugby Canada, I’ve watched the game explode in popularity over the last decade across North America. I hope to use my experience, knowledge and passion for rugby to continue sharing positive stories and igniting conversations at a local, national and international level.”