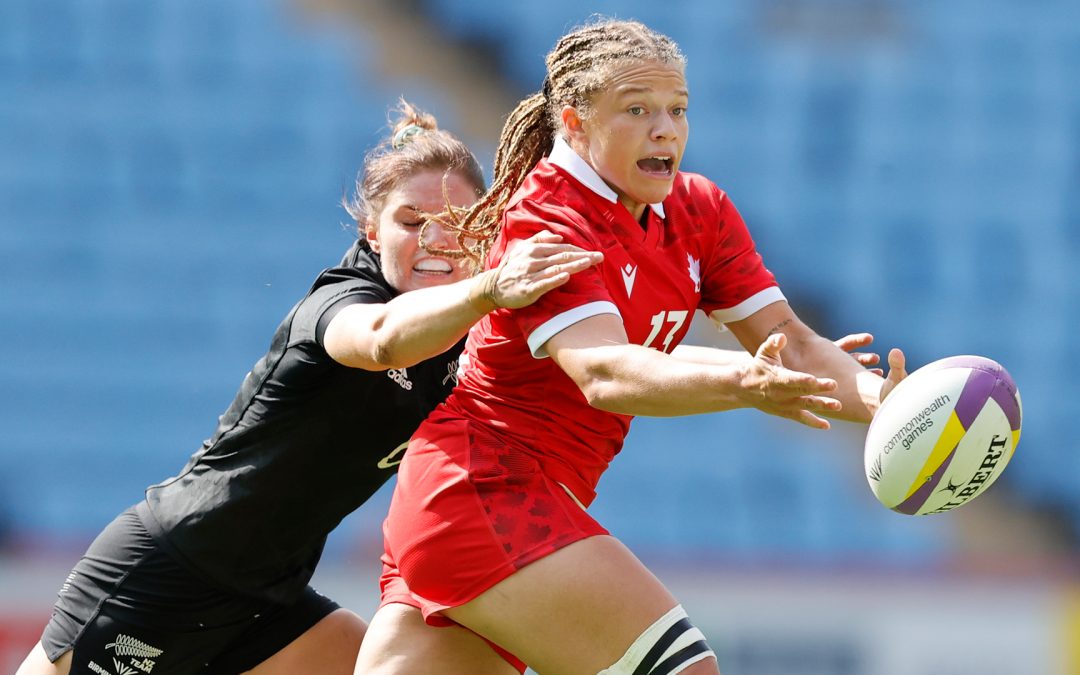 COVENTRY, July 29, 2022 – Canada’s men and women remain on course for the Birmingham 2022 Commonwealth Games quarter-finals after they ended day one with a win and defeat apiece.

Henry’s Paul’s team impressed with a 24-0 victory over Wales in their opener but fell 19-12 to Olympic champions Fiji in the final match of the day.

Jack Hanratty’s side recovered from an opening loss to New Zealand but recovered when they returned to the Coventry Stadium pitch later in the day and played the role of poopers with a 26-19 win over host nation England.

Canada’s men dominated Wales, who couldn’t live with the forward pack’s physicality or the backs’ ability to exploit a break.

Alex Russell opened the scoring and added another after half-time, while Cooper Coats led the scoring with 11 points from a try and three conversion.

Canada team began against Fiji in good heart, but three quick tries gave the Pacific Islanders the edge that they didn’t relinquish despite Canada hitting back with 12 points of their own.

Victory against Zambia on Saturday will secure the elusive spot in the quarters.

“We were hoping to get more possession in that first half, but when we eventually had the ball in our hands and played around we showed some good stuff, and show that fight, show that dog,” captain Phil Berna said.

“We put a lot of weight on that first game and there was a sigh of relief, and we were able to play a bit more relaxed, it was just a shame it took so long to find it.”

Canada’s women began against Commonwealth, Olympic and world champions New Zealand, and while their defence held out in the opening exchanges, once Portia Woodman dived over for the Black Ferns they quickly ran into a 24-point lead.

Chloe Daniels rounded off a smart move to open Canada’s account, and while co-captain Olivia Apps converted, New Zealand raised their intensity again to finish with a 45-7 win.

They were a different beast when they returned to the pitch and blew England away with a powerful performance that the hosts couldn’t live with.

“We knew what we were up against this morning and the result shows but going into the game with England we knew we could beat them, and we knew could upset the party,” Farella said.

“We were composed in defence and maintained possession in attack – really basic rugby and the group has really wonderful confidence to spot a gap and know how to take it.”

Jamaica’s men also faced a baptism of fire, against Australia, who finished with a 62-0 victory.

Australia wing Samu Kerevi dived over in the corner after just 12 seconds and while captain Conan Osborne probed, and Tyler Bush tried to stretch the Australia defence, there was little Jamaica could do against  one of the gold medal contenders.

Bruce Martin’s side rallied for the match against Kenya, but the East Africans showed the experience gained from playing on the World Series by winning 45-0.

“Kenya was the game we came out to target, and they are a World Series team as well, but the way they play and the way we play, we had the chance to take a scalp there,” Osborne said.

“When you come to this level you can’t make mistakes and we made some early on and once you make mistakes you’re chasing the game.”

🇨🇦 A few of the best images from @RugbyCanada's Women's Sevens Team from day one of @birminghamcg22.

It is the sixth time the rugby sevens has taken place in the Commonwealth Games since its  It was introduced for men at Kuala Lumpur 1998 and in that time New Zealand has won five golds, and South Africa one.

The women’s competition came in four years ago when New Zealand claimed the inaugural gold.

There are 16 men’s team and eight women’s competing at Birmingham 2022, with the tournament running from July 29-31 at Coventry Stadium, home of English Premiership side Wasps.