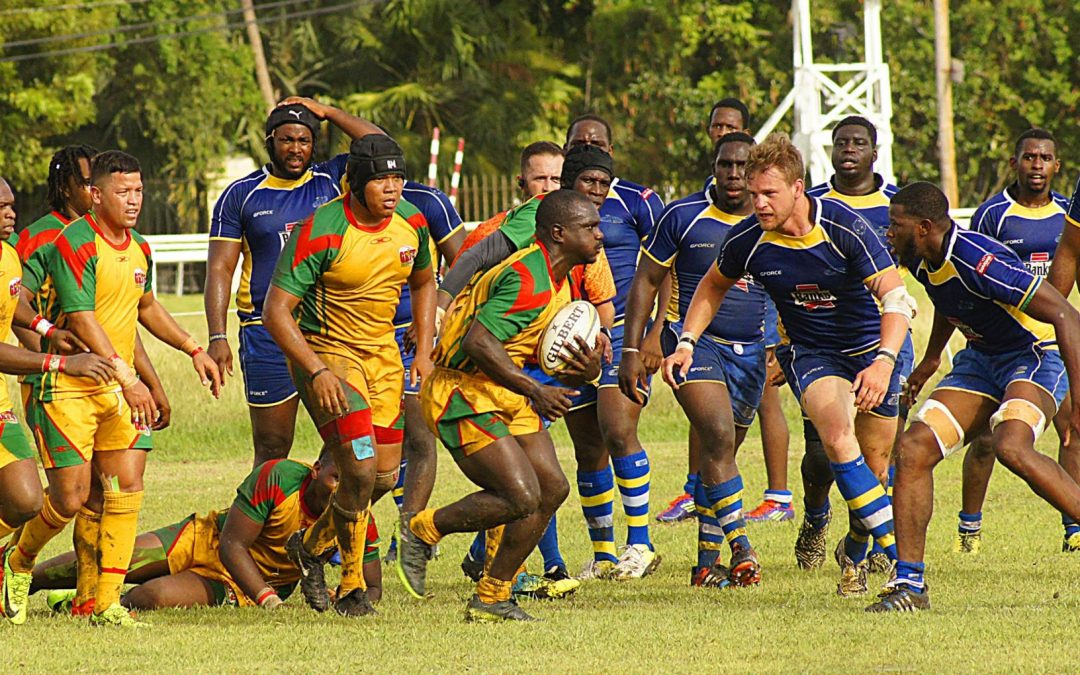 Submitted by Barbados Rugby
FOR IMMEDIATE RELEASE – May 15, 2017


Some called it “War at the Garrison”, others referred to David and Goliath, as arch-rivals Barbados and Guyana clashed in the first round of the annual Rugby Americas North Mens XVs tournament on Saturday May 13, 2017.

Guyana had the opportunity to score first when a Barbados infraction gave their No 9 Ryan Gonsalves the chance to kick a penalty. He was unsuccessful and the game rolled on, but immediately upon restart, a key Bajan player, Harold “Roadblock” Bynoe suffered a blow to the head while jumping for the ball. Under the safety protocols for suspected concussion, he sat out the remainder of the match.

Shortly after Daniel “Danny Ram” Ramsay replaced Bynoe, the deceptive Mikyle Walcott powered his way to the first try of the match, demonstrating the ferocity of a honey badger. Jake Caddy converted, to put Barbados up 7-0. Six minutes later, Caddy’s trust left boot took the lead to 10-0 on a penalty kick.

For the next little while, Barbados demonstrated a determination and aggression that kept Guyana bottled up in their own half. But 31 minutes in, Guyanese veterans Richard “Staggie” Staglon and Ryan Gonsalves contrived to put 10 points on the board in less than 10 minutes. Gonsalves had no luck with his conversions, or the half time score would have shown a four point Guyana lead instead of the actual 10-10 deadlock.

It was an extremely physical match, with the wet, slippery conditions contributing to the handicaps to the speedsters on either side, although Bajan Dario Stoute and Guyanese Ahmad Isaacs saw a lot of action. Big men for Barbados, Shaun English and Kevin Murrell, made sure that the men in blue won the scrummages with ease.

Second half action was even more entertaining, with the growing crowd of spectators cheering loudly for their teams and favourite players. Jake Caddy gave Barbados the lead with a penalty, but less than five minutes later, Guyana’s Vallon Adams scored a try and once again his teammate Gonsalves missed the conversion. The momentum swing saw Staglon add to the lead with another try, while Gonsalves’s bad luck on conversion attempts continued (much to the relief of the Bajan fans!) Another penalty kick from Jake Caddy raised local hopes and the Bajans surged forward in a furious attempt to regain control of the match, now showing a score of 16-20 to the Guyanese.

Shortly after however, Ahmad Isaacs and Rickford Commings combined to add another try and successful conversion to take their lead to 16-27. 15 minutes later, Adams and Commings added another seven points to take it to 16-34. While some of the spectators visibly lost hope, the men on the pitch refused to give up and appeared to rev things up. The ever-reliable Bajan captain Jeren “Blinki” Clarke, who has been playing high level rugby since his early teens, led the way with a steam-roller attack that finally ended in a try for Barbados. Kevin Carter’s conversion attempt was no good and amid a flurry of substitutions on both teams, somehow, the Bajans regrouped and charged in to score another “Blinki” try. Sadly, Zayn Nicholson’s kick was no good and the final score was Barbados 26-34 Guyana.

Coach Dennis Hargreaves expressed his pride in the team’s performance and exhorted them to focus on the next fixture, an away match against Trinidad and Tobago later in May.

It should be noted that Guyana won the South Zone last year, and were overall runners-up to champions Mexico. The Barbados team comprised several veteran players, with some younger players who earned their first national caps.

For more information on rugby in Barbados, visit www.facebook.com/BarbadosRugbyFootballUnion