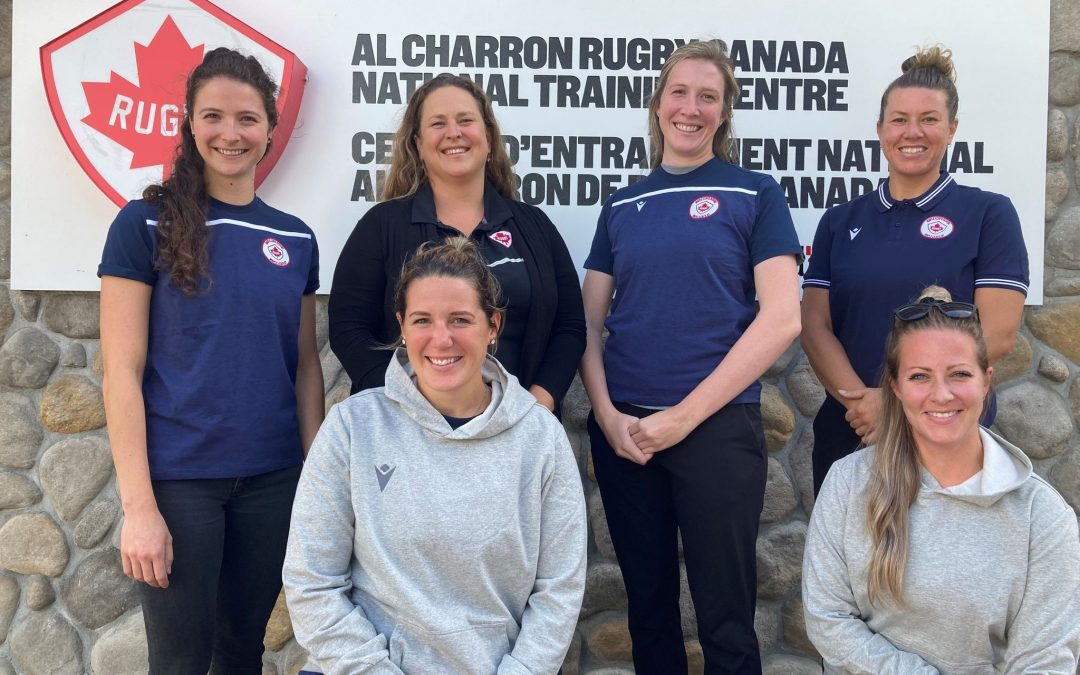 As the intake of 12 new athletes and associated staff gathered together for the launch meeting of the Maple Leaf Academy at the end of August at the home of Rugby Canada in Langford, the room was already abuzz with excitement about what lay ahead for the country’s next generation of stars.

But then it dawned on Kristy Martin Hale, Rugby Canada’s Coordinator Women’s High Performance, that the day was also special for another reason – everyone in the room was female, not just the young hopefuls themselves but the people put in place to help them on their journey to the France 2024 Olympic Games and beyond.

“This is the 12th year now that I have been involved in some level of women’s international or national rugby and it was the first time that I’ve ever been in a meeting room like that and everyone was female. It was a very clear visual of the progress that we are making,” said Martin Hale.

“It showed them there are opportunities to be involved in the sport in other capacities beyond the game.”

Martin Hale recognises this is not a phenomenon limited to Rugby Canada, she is seeing the growing influence of women in rugby all over the world.

“In 2012, I went to a women’s high performance gathering that World Rugby hosted in England. It was for managers and directors leading the women’s game and only about a quarter of the people were women.

“Then, last July, I went to a similar high performance gathering, in San Diego and three-quarters of the people in the room were women.”

“To see that growth in an eight-year timespan, where women are actively engaged in leadership roles and actualising those opportunities, is really encouraging.”

Maple Leaf Academy head coach Kelly Russell was part of the squad for RWC 2010 managed by Martin Hale and is not alone in staying in the game.

“There’s probably a dozen women who were part of that 2010 squad who are head coaches of university programmes or are now involved in our national pathway.

“Kelly is one of the most decorated Canadian athletes ever and she has made the direct transition from playing into a leadership role, and Mario Gallo was vice-captain in 2010 and is now an assistant coach with the women’s 15s programme and has just been confirmed as an intern in the World Rugby coaching development programme.”

Maple Leaf Academy players train five days a week at Rugby Canada’s hub and not only take inspiration from those around them in a coaching and administrative capacity but also in seeing the current crop of sevens stars close up.

“The other really cool thing this year that is different to other years is that the Maple Leaf athletes are training alongside those in the national senior sevens programme,” explained Martin Hale, a resident of Vancouver Island.

“In the past, they’d been separate but this year the approach we’ve taken is very streamlined.

“Maple Leaf athletes are training on one end of the field, and at the same time, the Olympians are training at the other end so there are more opportunities for them to integrate; the women they are aspiring to be are right there. It is awesome women doing awesome things.”

Time has marched on and so much progress has been made in pursuit of gender equality since Martin Hale, 42, was a young rugby player at university.

“When I was an athlete, I was never coached by a woman and there certainly weren’t women in rugby leadership roles.

“To be an 18-year-old now at the start of the pathway is pretty amazing.”