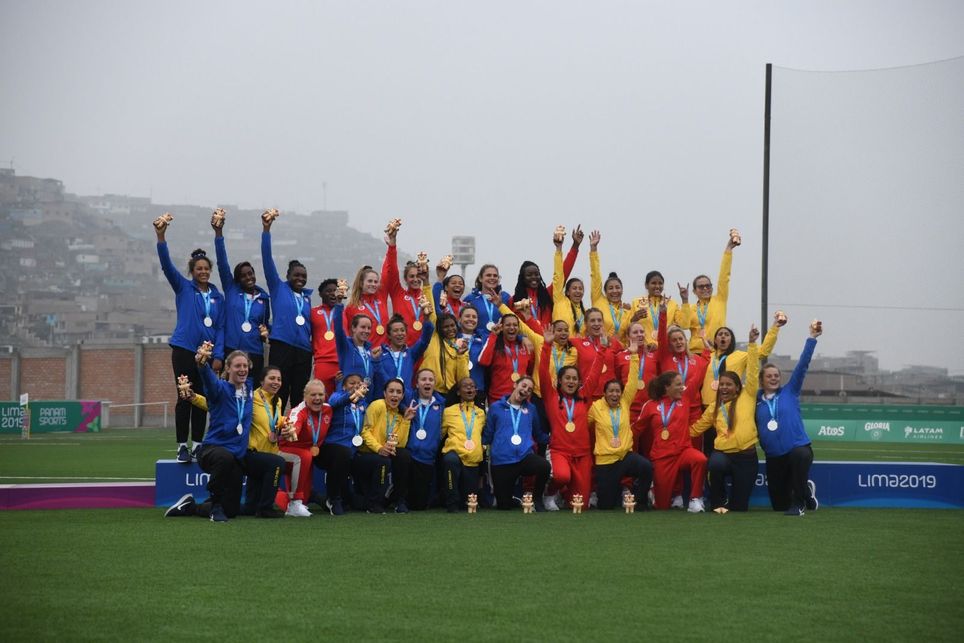 Argentina’s men overturned the result of the 2011 and 2015 Pan American Games final by defeating two-time champions Canada 33-10 to win gold for the first time but there was joy for Canada in the women’s event as they successfully defended the title they won on home soil in Toronto four years ago thanks to a 24-10 victory over the USA.

As expected, it was the core teams on the HSBC World Rugby Sevens Series who dominated proceedings over the course of the three days at the Villa María del Triunfo, a top-class venue that will serve Peruvian rugby well for years to come.

Buoyed by the vocal home support, Peru’s women’s team can be proud of their sixth-place finish; however, there was no disputing that finalists Canada and the USA, were a cut above the rest in the women’s event.

Reigning champions Canada scored 134 unanswered points without conceding any in reply in wins against Mexico, Peru and Brazil to top Pool B, an achievement mirrored by their North American neighbours who piled on the points while keeping their try-line intact at the same time in defeating Trinidad & Tobago, Argentina and Colombia in Pool A.

Colombia posed no threat to Canada in the semi-finals, losing 41-0 after Olivier de Couvreur scored a hat-trick for the Canadians, but they recovered well to claim their first rugby medal at the Pan American Games with a shock 29-24 win over Brazil after the bronze medal shootout went to sudden-death extra-time.

Brazil, who enter the world series as a core team next year, had never lost in 101 matches against regional opposition but Colombia patiently worked an opening for Olympian María Camila Lopera Valle to score the decisive try.

In the final, the young Canadian team dominated for most of the hard-fought contest and scored four tries to the USA’s two – Asia Hogan-Rochester helping herself to a hat-trick.

“It is great for this young group of girls that came here to win the gold medal,” said Canada coach Morgan Williams, reflecting on the tournament. “Now you see the development we have in Canada, with young girls that are coming up are putting pressure on the older ones and for me, as a coach, it is great because it makes my job of selection so much harder.”

In a highly competitive men’s competition, Pool A went right down to the wire with Brazil, who had drawn their opening match against Chile 14-14, needing to beat the previously unbeaten USA to join the Men’s Sevens Eagles in the semi-finals.

The two standout teams in Pool B were the eventual finalists, Argentina and Canada. The teams met in the final pool match and it Los Pumas Sevens who prevailed 12-7.

Santiago Gomez Cora’s side played with plenty of physicality and purpose to see off the USA 31-7 in the first semi-final before Canada enjoyed a comfortable 33-5 win over Brazil to put themselves one win away from a hat-trick of Pan Am titles.

In a bronze medal match every bit as tight as the pool match between the two teams, a sudden-death extra-time try from Marcus Tupuola handed the USA a 24-19 victory over Brazil.

Canada opened the scoring in the final, Josiah Morra getting the defending champions off to a flying start with a try after only 30 seconds. But Argentina hit back to score three tries, all converted by Santiago Mare. Luciano González Rizzoni scored twice in quick succession before German Schulz added another to give the 2015 runners-up a 21-5 interval lead.

Franco Sabato put further daylight between the teams and Lautaro Bazan Velez got a fifth before Pan American Games veteran Sean Duke got a late consolation for the beaten champions as the match ended with a 33-10 scoreline in favour of the Argentineans.

“We are very, very happy; this team deserved to finish the season like this, first with Olympic qualification and now winning gold in Lima,” said Argentina captain Santiago Álvarez. “I am very proud of a group that generated a sense of belonging and I am happy for what we managed to show on the field.”