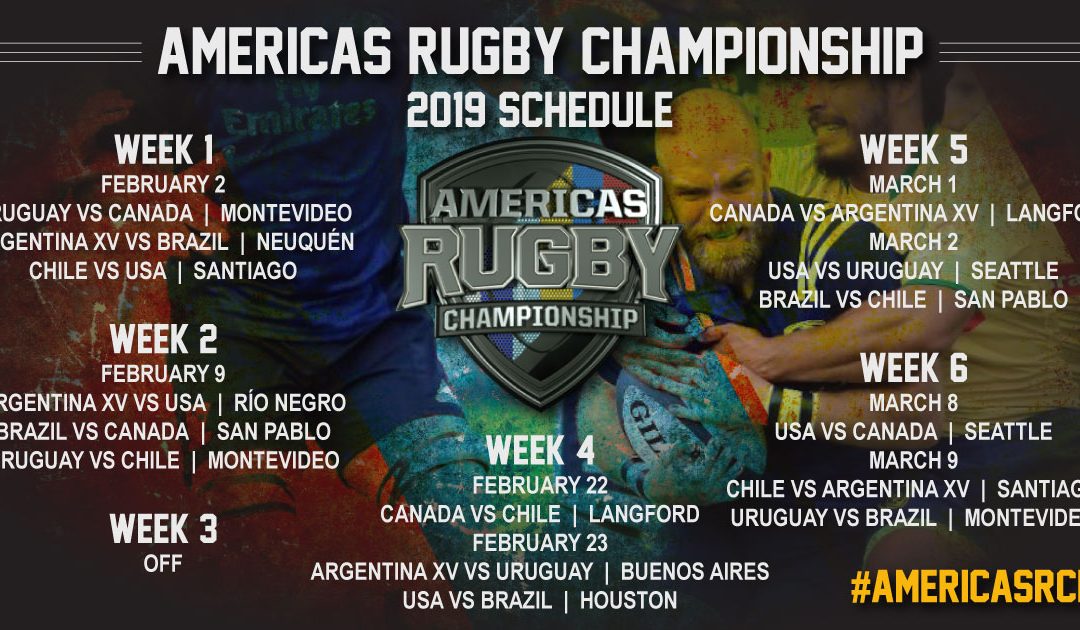 A bye week has been added after Week Two as part of the tournament’s commitment toward player welfare.

In a year that will culminate with three, hopefully, four, ARC nations playing in Rugby World Cup in Japan, every game will be relevant as teams and players build toward competing on the sport’s largest stage.

Last beaten in this tournament in March 2016, the USA Eagles enter as the team to beat. However, their main opponent, ARC 2016 champion Argentina XV will welcome the USA to Río Negro in Round 2, aiming to set the record straight.

After drawing the first two times these teams met, the Eagles managed a narrow 17-10 win in the opening round of the 2018 tournament and took an early control of the ARC; a lead they did not relinquish.

Canada, fourth in 2018, is currently preparing for the Rugby World Cup 2019 Repechage tournament in France this month. Everyone in Rugby Americas hopes that by the time Canada travels to Uruguay for round One they will have already qualified as the fourth team representing the Americas at the 2019 World Cup.

The six-team, fifteen-game tournament, played in nine different cities, will again be widely available for live viewing, with broadcast details to be announced at a later date.

Rugby Americas President Agustín Pichot said: “In announcing the schedule for the fourth edition of the Americas Rugby Championship, we are delighted with the sustained growth the tournament has experienced. The ARC was born out of the need to create a vehicle to inspire a younger generation of players and fans, while assisting in the development of the current players. Year over year, this has been widely achieved.”

Pichot continued: “2019 is a very big year for rugby. Having both regions of the Americas as early as February in international competition shows that we are ready to continue growing and developing. Furthermore, I’m very happy with the bye week being added to the schedule in the interest of player welfare.”

Rugby Americas CEO Dan Payne added: “The leading competition within the Americas region, the 2019 Americas Rugby Championship, will look to prepare players from what we hope will be four countries, pending the results of the Repechage Tournament in Europe, for next year’s Rugby World Cup.”

“Simultaneously, the competition serves as a vehicle to grow and promote rugby across all six countries as they each keep an eye toward 2023.”

Rugby Americas is also is unveiling a new logo for the 2019 Americas Rugby Championship. The chosen color palette for this strong logo represents the colors of each nation involved in the tournament. The metallic treatment and heavy typeface represents strength and staying power.