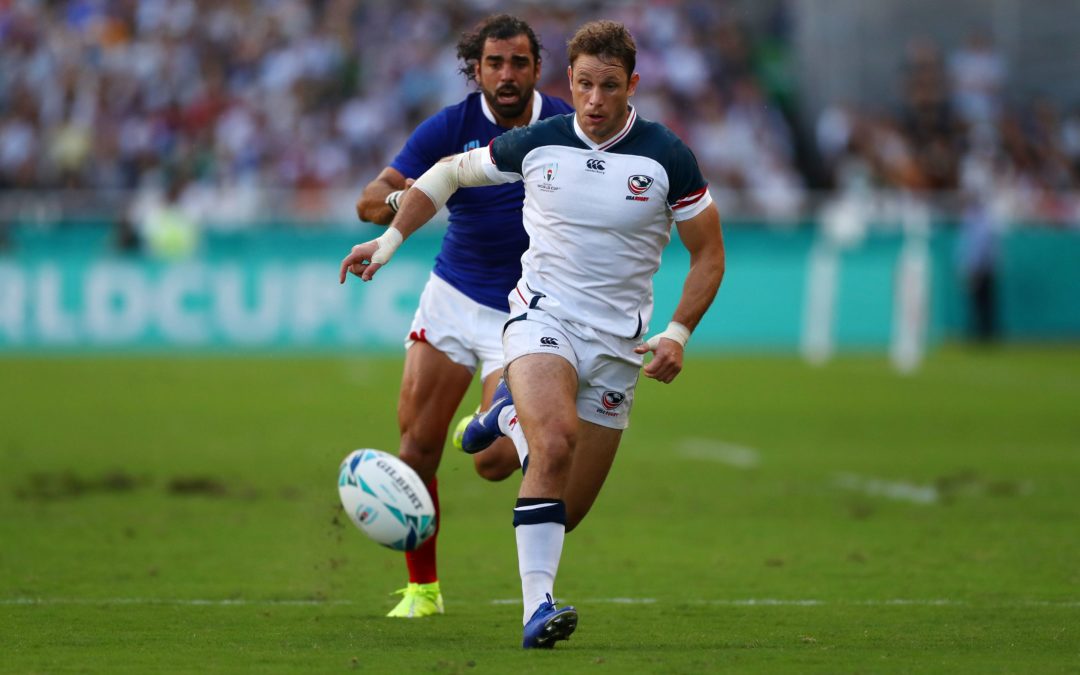 KUMAGAYA CITY, JAPAN (October 8, 2019) – Tonight the USA Eagles will face Argentina in a critical pool C match to potentially decide the 3rdplace finisher in the group, which would guarantee automatic qualification for the 2023 Rugby World Cup in France.

Argentina, who has six competition points through three matches, would officially book their spot with a win or draw tomorrow against their Americas rivals.  While USA has failed to secure a point in either of their opening two losses to England and France, they close out the tournament on Sunday against Tonga. A game that they could certainly win and a famous victory over Argentina tomorrow would build their momentum to potentially automatically qualify for the first time in their history at the end of the pool stages.

In tomorrow’s test match, 28 of the 46 selected players have played on at least one Americas Rugby Championship (ARC) test match dating back to 2016.

Between Canada, Uruguay, the Eagles & Los Pumas, over 75% of the four squads have featured in the six-nation annual competition, which was created following the 2015 Rugby World Cup for the Americas.

In the lead up to the 2015 tournament, Canada, USA and Uruguay averaged only 7.5 test matches each year, mostly during the June and November test windows, along with the official qualifying legs of the RWC. Argentina, on the other hand, averaged 15 test matches per year against top tier opposition.

In an effort to provide more regular and valuable test match opportunities to develop top tiered athletes with all eyes on Japan in 2019, the ARC in its current form began in 2016. Canada, USA and Uruguay, along with rising nations Chile and Brazil and Argentina’s XV domestic side, would be given the chance to compete in a regularly scheduled competition in February and March and the tournament has thrived ever since.

USA and Argentina XV have split the competition, with two tournament titles a-piece and all five nations have had the opportunity to bleed new talent at the test match level. The USA Eagles have climbed the World Rugby rankings since the 2015 Rugby World Cup, including their best ever season in 2018 and famous victories over Scotland and Samoa. Uruguay, on the other hand, has made huge strides in their game by qualifying as the Americas 2 spot for the first time ever.

“Rugby in the Americas continues to grow in large part thanks to competitions like the Americas Rugby Championship (ARC) and Challenge (ARCh), which the experiences have proved invaluable in Japan so far,” said Dan Payne, Chief Executive Officer for Rugby Americas.

“Growing nations often struggle to challenge the upper echelons of the game due to lack of meaningful competition and regular access to their players in a high-performance environment. As we’ve seen over the last four year, the ARC has nearly doubled the amount of test matches these nations get to play each year to bolster their depth chart ahead of the June and November test windows,” added Payne.

For example, of Canada’s 31-man RWC roster only late-addition Peter Nelson and youngster Andrew Quattrin have failed to suit up during an ARC campaign over the last four years. While seven players – Lucas Rumball, Kyle Baillie, Eric Howard, Guiseppe du Toit, Conor Keys, Cole Keith & Luke Campbell – have all won their test debuts in the competition.

In addition to Japan’s heroic victory over Ireland, 19thranked Uruguay recently pulled off a hugely exciting upset over then 10thseeded Fiji, which has received global praise from the rugby community.

“Uruguay’s win over Fiji is a product of years of hard work, commitment and competition for Los Teros as they have climbed the ladder and built an impressive squad of mostly domestic-based athletes,” added Payne. “Unlike many nations where their best players are in Europe, Uruguay – along with USA and Canada with Major League Rugby – are building depth at home and meaningful competition is strengthening their efforts,” said Payne.

For 10thranked Argentina, 12 of the 31-man RWC roster have played in one game in the ARC for their Argentina XV squad dating back to 2016. Although they have not been capping games since it’s not their top side, the ARC has launched test match careers for the likes of Marcos Kremer, Enrique Pieretto, Rodrigo Bruni, Santiago Medrano and Lucas Mensa to name just a few.

11 of USA’s 31-man squad made their debuts in the ARC dating back to 2016, while another 18 have featured in at least one match.

The 2020 ARC calendar is set to be released following the tournament finale on November 2ndat International Stadium Yokohama in Yokohama City, which starts the road to the next RWC in France in 2023.