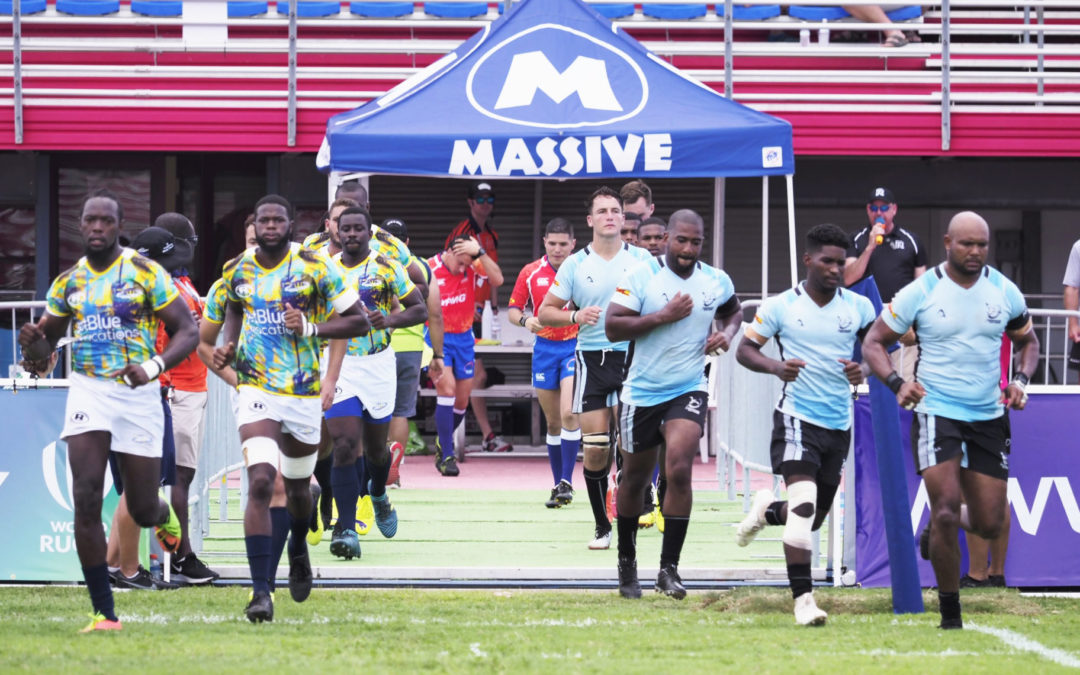 George Town, Cayman Island (July 6, 2019) – Day one of the 2019 RF Group Rugby Americas North Sevens kicked off under sun-drenched skies at Truman Bodden National Sports Complex on Saturday with a total of 21 matches being played throughout the day. With an abundance of highlight-reel tries, big tackles and upsets on showcase, local and international rugby fans were given their monies worth.

In the men’s pool play stages, high speed, high skill games were on display by eight teams across two pools. An exciting day two clash is set for pool leaders Canada and Jamaica in the offing.

In Pool A Canada had convincing wins over all of their opponents, outscored the competition 151-5, and showed themselves to be favorites to book a spot at Tokyo 2020. A surging Mexico took second place in the pool and will advance to day two with confidence after two solid wins over Bermuda and Barbados. Though they showed flasehs of brilliance throughout pool play, Bermuda and Barbados will be looking to rebound from a tough day to bring some upsets to the table as the tournament progresses.

In Pool B an athletic Jamaica took top honors, outscoring their opponents 111-12. The Crocs brought an energetic offensive style and a stingy defense that opponents were challenged to wrestle with. Trinidad & Tobago came second in the pool with solid wins over Guyana and the hometown Cayman Islands.

Joel Clark from the Cayman Islands had an impressive first day, seeming to pop up at the right time for the local side. His style of play delighted Cayman fans who didn’t miss a beat cheering their team on.

Highlighting his favorite player to watch on day one, commentator Gavin McCleavy said:

“Pantor calmly directing traffic for Trinidad and Tobago is a coaches dream. He always has an eternity on the ball and when his slight frame gets swallowed up by a mob he does a superman move in a phone box and steps out looking like Clark Kent–unruffled, tie straight and glasses on like nothing happened.”

“Oshane Eddie from Jamaica also looked dangerous and lively with the ball in hand. Everything he does is with rapid purpose and his feet work so quick I worry they did it without his brain’s consent.”

The surprise of the day came from a last second try by Trinidad and Tobago to tie the RAN Sevens reigning champions Mexico at fifteen points.  The standout team on Saturday was clearly Jamaica going 3-0 with a +101 point differential and wins over Saint Lucia (20-5), Bermuda (55-0) and Bahamas (36-5).  It would, however, be remiss not to mention Jamaica had an easier draw than their top competitors, Mexico and Trinidad and Tobago. Day two promises to bring serious clashes in the final matches of pool play, followed by the medal rounds. The top two teams will book their ticket to the Olympic repechage tournament for Tokyo 2020.

Trinidad and Tobago’s prop Kwanieze John was huge on the first day of the tournament, brushing players aside with devestating strength when carrying through traffic and standing nearly immovable at the breakdown. Mexico’s Jennifer Salomon played a leading role in distributing and directing the go forward momentum that Mexico has sometimes lacked in the past.

With a keen eye on players, commentator Andrea Burk said:

“Carlene Johnson of the Bahamas was the standout player for me today. The former Bahamian sprinter took the team’s speed to another level and I suspect she will continue to put defenses to the test on day two.”

Some of the best action shots from the first 12 games at today’s #RAN7s at Truman Bodden National Sports Complex! @WorldRugby7s #RANRugby pic.twitter.com/zbJwIxLEtu

Exciting Day Two on the Horizon

“Today was an excellent day of competition to kick off the tournament,” said Rugby Americas North General Manager, Niall Brooks. “We saw major upsets with Saint Lucia defeating Trinidad & Tobago Women and Cayman Islands Men over Guyana with one player off for most of the match. Olympic qualification is on the line tomorrow in the men’s competition and there’s four spots – two for the men and two for the women – in next year’s global repechage up for grabs as well, which should make for a hugely exciting day. ”

Another 20 matches are set to take place on Sunday in Georgetown, with the Canada and Guyana men kicking off the day at 9:30 a.m. local.

See all of the results and view the full day two schedule on the RAN Sevens event page. 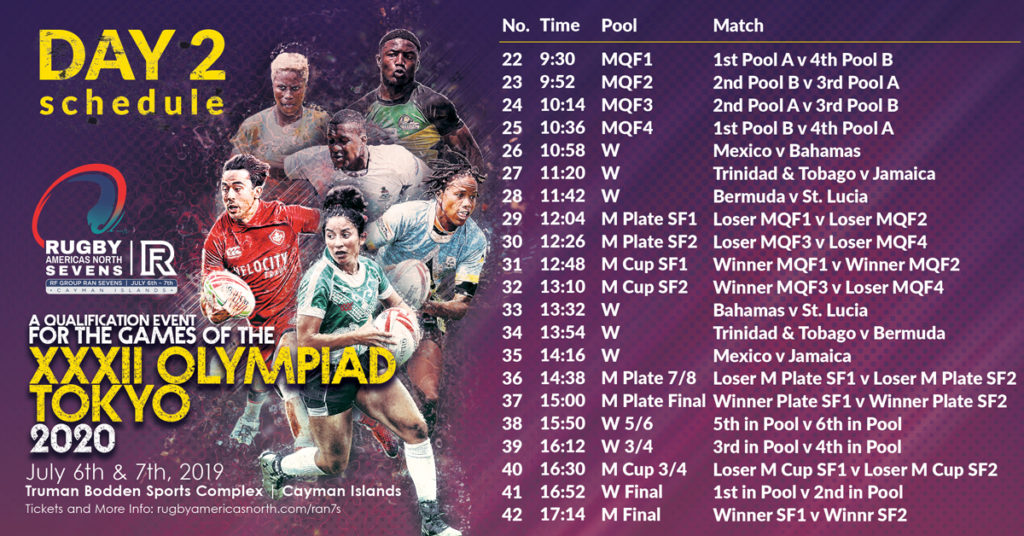