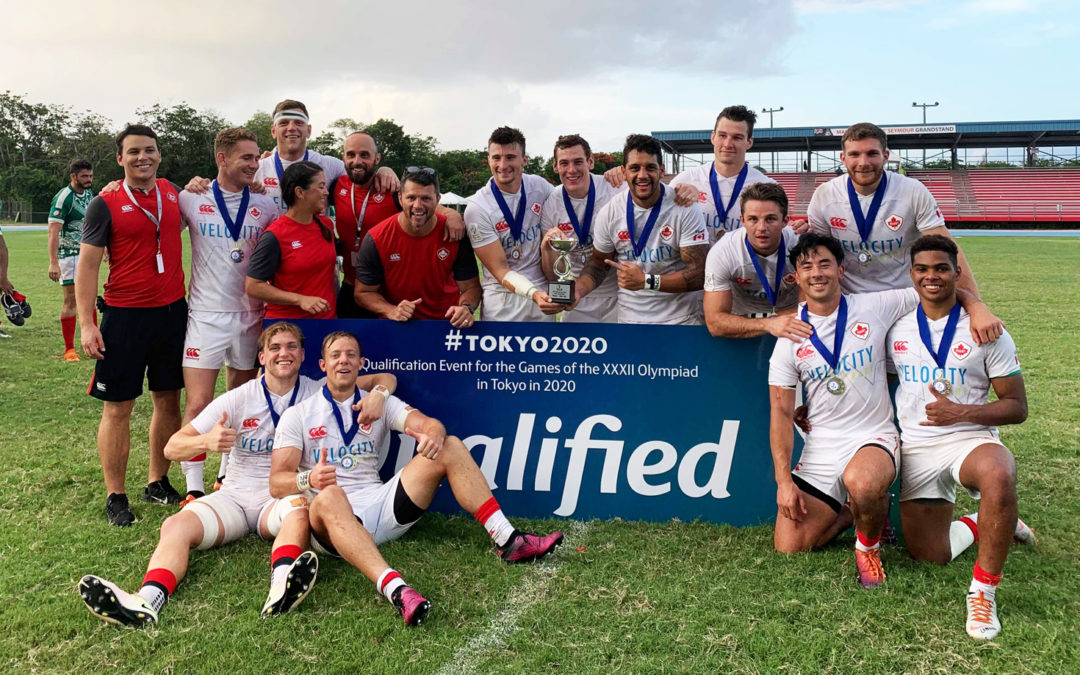 Having lifted the championship trophy, Canada Men will officially represent Rugby Americas North along with USA Men and Women and Canada Women at next summer’s Olympic Games in Tokyo, Japan. Despite the heartbreaking loss in the Cup Final, Jamaica, along with third-place finishers Mexico, has one more chance to qualify for the Olympics at next year’s World Rugby Global Repechage Tournament. In the women’s competition, top two finishers Mexico and Jamaica will also look to book their Tokyo spot at the repechage next year.

Day two of the 2019 RF Group RAN Sevens brought an expected gold medal for Canada who swept all before them, beating a game Jamaican side in the RAN Sevens final by a score of 40-5. Canada’s HSBC Sevens Series experience put them a nod ahead of their competitors, and Nathan Hirayama pulled the strings as the team was able to score from anywhere on the field. Jamaica was one of two teams to score on Canada. They were led by a strong showing from Captain Ashley Smith, who made short work through the semi-finals and now has one year to build towards Olympic qualification under new head coach Steve Lewis.

After the match an elated Harry Jones said:

“A lot of us have been grinding for this for a long long time. There are a lot of boys back home that couldn’t be here but they were on the field with us. To all of our fans, supporters, staff, before and now, we love you all. This is such a great feeling.”

Mexico, by placing third, also qualified for the repechage tournament, beating Bermuda for the right to move forward. Despite challenges throughout day two, Mexico was ably led by the plucky Alejandro Chavez who kept his side moving as they scored tries through speed, power, and heads-up play.

In Sunday’s earlier matchups, Cayman Islands delighted their hometown fans with a Shield Final win over an experienced Guyana side who showed their brilliance throughout the weekend. Trinidad and Tobago bested Barbados in the seventh-place match to round out the day.

St. Lucia impressed for a second day beating Trinidad and Tobago in the third place final 22-0, proving that their Saturday win wasn’t a fluke. Number ten Renatta Fredricks and speedster Mary “Lamborghini” Roberts stood out in the crowd. Fredericks was electric with her devastating runs, and Roberts lived up to her nickname with line break after line break slicing through the defense at will.

The story of Mexico and Jamaica was a back and forth affair on Sunday. In the final round of pool play Jamaica used their speed on the outside and played a sound sevens game to beat the ultimate champions 24-7.  In the final, however, Las Serpientes bit back and capitalized on three yellow cards by an over-eager Jamaican defense after several high tackles. Mexico’s Isabela Gonzales helped her team clinch the RAN Sevens title for the third year in a row with a brace of tries and two conversions.

“We are very happy. We were able to learn from each game and adjust our game plan accordingly to reach the result that we did against Jamaica, who was a fierce opponent and really tested us in the first match.

Our teamwork and passion was the key to our success throughout the tournament.  Now our focus is on the Pan American Games in Lima at the end of July. We are looking forward to rising to the occasion. We’ve been waiting for this moment and we are ready for more.”

“I would like to congratulate all of the teams, staff, match officials, volunteers and everyone who helped make this week’s 2019 RF Group Rugby Americas North (RAN) Sevens a resounding success. The quality of competition continues to grow in the region and high-performance tournaments, like the RAN Sevens, showcase all the exemplary work that’s being done by each union.

Congratulations to Canada Men, who will represent RAN at the 2020 Summer Olympic Games next year in Tokyo and I’m wishing all the best to Jamaica and Mexico Men along with Mexico and Jamaican Women, who will compete in the World Rugby global repechage next year!

Finally, I would like to send a special thank you to the Cayman Island Rugby Union for their fantastic hosting this week.”