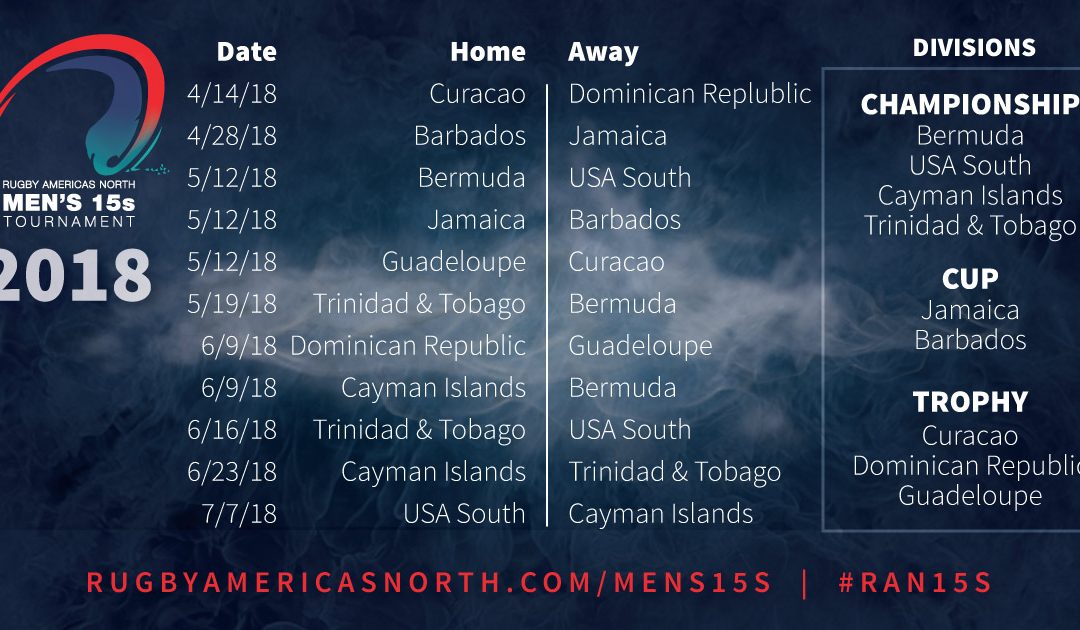 The schedule for Rugby Americas North (RAN) annual Men’s 15s Competition has been released, and includes eleven matches from April through July. Eight RAN teams plus the USA South representative team will compete in three divisions–Championship, Cup and Trophy.

For the 2018 season, Guyana and Mexico are playing in the new Americas Rugby Challenge in August along with South American Rugby teams, Columbia and Paraguay.  The second place finisher of the two RAN teams in the new competition will play the top team from the RAN 2018 Championship division, excluding USA South. The winner will compete in the 2019 Americas Rugby Challenge and the loser will play in the 2019 Men’s 15s RAN Championship division, and will assume the division rank held by the Championship team that contested the playoff. Home field advantage will be awarded to the Championship winning team.

So as to ensure that all Members have the opportunity to play at least one senior men’s 15 a-side international match in 2018, Turks and Caicos will play the British Virgin Islands on May 12th in Providenciales andSt. Vincent and The Grenadines will play and home match versus St. Lucia at a date to be confirmed.

RAN General Manager and Tournament Director Niall Brooks remarked on the changes: “Everyone at RAN are excited about the new format of the RAN Senior Men’s 15 a-side tournament. Over the years, the existing format was becoming stale with the same teams playing each other year after year.  The new format sees teams from the North and South playing against each other in the same divisions and also promotion and relegation between the Americas Rugby Challenge and the Championship, and the Championship and the Cup divisions. This in turn creates a pathway whereby teams can progress and ultimately test themselves against some of the top teams in Sudamerica Rugby. The tournament also ensures that all teams play at least one home match, thereby helping to promote and develop rugby locally.”

Fixtures, results and standings for the 2018 tournament can be found on the tournament website at rugbyamericasnorth.com/mens15s and fans can follow on social media using the hashtag #RAN15s.