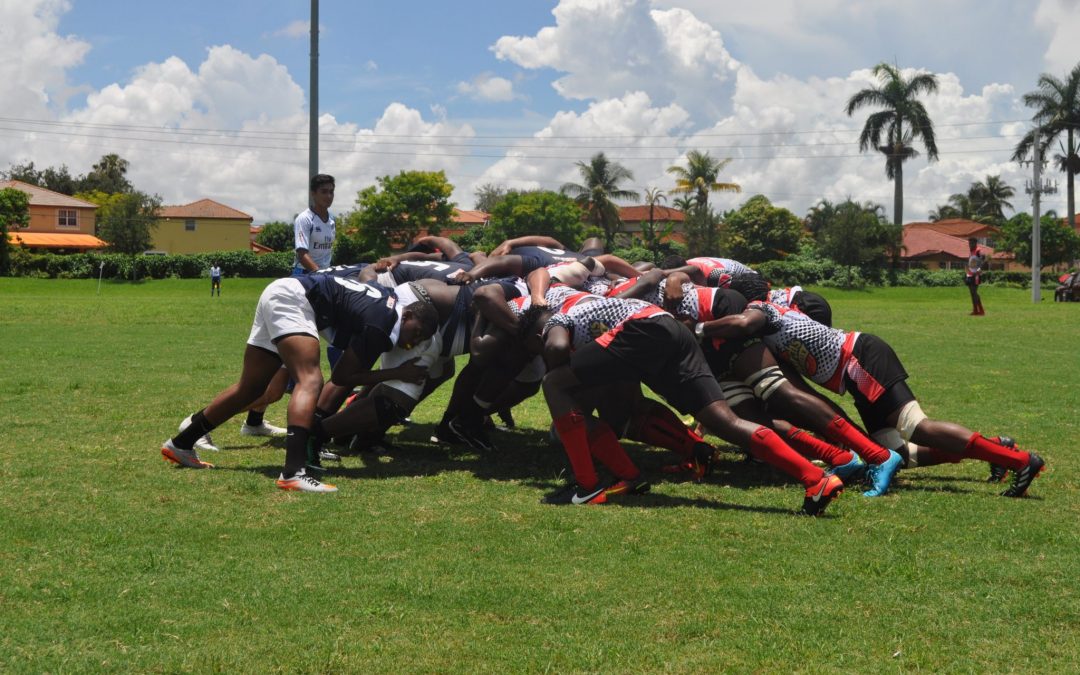 The first round of RAN action began this week at Viscaya Park in the heat of Miramar, Florida. Performing well in pool play is vital as a loss eliminates any hopes to compete in the Championship.

USA South (A) vs. Jamaica

The USA South Panthers seemed to be the favorite in this contest as they return to the RAN U19s Championship as the defending champs from 2016. Last year Jamaica competed in the lower division of competition called the trophy division. But after steadily dismantling their opponents in 2016 Jamaica was relegated to the Cup division. USA South came out the gate driving the ball well but a handling error led to a Jamaica steal, pinning the Panthers deep in their own territory early. Masterful work from Shea O’Hanlon relieved that pressure with his excellent kicking performance. O’Hanlon was selected as captain for the USA South after a stellar 2016 tournament. The Panthers scored early with a try coming from a powerful run from center Calvin Gentry. The Panthers retained possession on the kickoff and were able to take the ball down inside the Jamaican 22 meter line where another bulldozing run led to a Panther try, leaving a Jamaican player injured on the play. The injury would halt the game for 45 minutes as the RAN ambulance protocol called for another ambulance to return to the field before action could resume.

After the stoppage USA South came right back to their game plan; feeding their forwards the ball and allowing their line breaks to draw in the defense, then letting the ball go wide to the centers. When Jamaica could retain possession it seemed their speed could be dangerous, but penalties and handling errors stunted each of their attacks. The impressive forward play from USA South led to several forward tries in the second half and an eventual 47-0 victory.

USA South will advance to play Bermuda in the second round of pool play. Winner of that will win the pool and advance to the final. Jamaica will face the Cayman Islands, the loser of Cayman vs Bermuda.

Game 2 of action was delayed about an hour due to the injury stoppage in Game 1, but the stoppage gave time for the sweltering sun to set and the park to cool down. This game was just opposite of the game one blowout. Bermuda took an early lead with the explosive speed of their outside centre as he tore through the Cayman line for an elusive 50 meter try. Cayman was able to put together long driving attacks with line breaks from their number eight Dylan Bostock, but unfortunately penalties and turnovers would put the ball right back into the hands of Bermuda. At half Bermuda had a 15-0 lead over Cayman, but Bermuda would not score again for the rest of the game. Cayman found their rhythm in the second half and was able to bring their score to 15-10.

Bermuda played strong defense late in the game and a few Cayman handling errors late sealed it.
Bermuda with the 15-10 victory will move on to face USA South in the second round of pool play. The winner of USA South vs Bermuda will advance to the final. Cayman will face Jamaica in an expected defensive battle pitting Cayman’s size against Jamaican speed.

Day 2 of RAN action followed a similar script to the Day 1 games, one team starving the other of possession. Trinidad was completely dominant in their offensive attack, their style of play was fast paced and the constant recycling of the ball gave Turks & Caicos trouble. The strength of Turks & Caicos was their ability to finish their solo tackles and they did that well. For long periods of the game the action was relentless.

After long stretches of back and forth contest both sides grew tired. The RAN mandated water breaks provided a short but vital rest period as the Miramar heat sweltered. Following the breaks Trinidad was able to fix their handling errors and pour the points on. Turks & Caicos looked strong in their simple attack for glimpses but simple mistakes ruined their drives into Trinidad territory. The impressive play from Captain Melek Fraser and fly half Jeron Pantor loomed large in the action packed contest. If those leaders can fix their team’s mistakes Trinidad will go far in this tournament, as they have the last few years.

Mexico vs. USA South (B)

This was the most exciting game of Round 1 at the 2017 RAN Championships. While this is called the USA South 2nd side, they played to the level of an A side. Mexico always brings a strong side to this tournament and their size was noticeable in warm-ups. Mexico was led by their Captain and outside centre Guerrero and he certainly put on a show. Guerrero scored an early 50 yard try after a stellar kick return from his fullback set up the speedy outside centre for the try.

USA South went down early, but several bulldozing runs from inside centre Doug Vawter would help USA South take an early lead. Right before the end of the half Mexico would take back that lead with a lengthy phase of play ending in a try in the corner. Mexico’s tactical kicking and strong defensive structure would keep USA South from scoring and allow the Serpientes to advance to the second round of action. Mexico will face Trinidad and Tobago, which is expected to be the best matchup of the second round.